History of The Golden Retriever Club 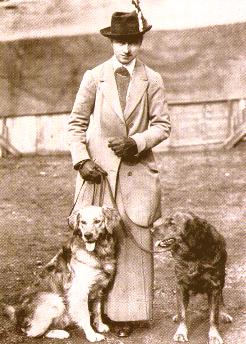 “In 1910, a small but determined band of enthusiasts
laid their heads together to further the interests of the breed
which they had worked so hard to bring to the forefront of the
battle. having at long last obtained official recognition and
separate classification for our favourites at ‘the hands of the
powers that be,’ ie the Kennel Club, we launched on the public
a ‘new breed’ (new since 1870 or so) known as ‘Retrievers, Yellow
or Golden.’ Not content with these concessions to the yearly
increasing numbers of Goldens. We felt the time had come when
their interests should be fostered and guarded by means of a
Specialist Club. Hence the birth of the Golden Retriever Club
in 1911”

In those days they had a small committee of four, and a tiny
list of members. They showed their Goldens at every show to which
they could afford to travel, guaranteed the classes and won their
own prizes. In a comparatively short time, one or two Goldens
managed to catch the eye of Field Trial Judges, simply because
it became impossible to ignore the sterling work done by them
in the field.

So the foundations of the Golden Retriever as a breed were
well and truly laid before the First World War, during which breeding
was only under Kennel Club Licence. No field Trials were held,
although some of the big shows continued until 1917, in which
year Golden entries at Cruft’s were only twenty-six as opposed
to the grand total of seventy there had been in 1915.

To quote Elma Stonex, who through years of research discovered
the true origins of the breed,

“At that time the breed was still big and heavy, with
rather long backs and often with tremendous coats. These dogs
were criticised as cumbersome and a good deal slower in the field
than the other Retriever breeds, although they had the softest
of mouths and were exceptionally good in water. We owe a great
debt to those early breeders, whose efforts and work in careful
breeding were crowned with success in producing from them down
the years (without the use of outside blood) a balanced short-coupled
dog, with a dense and water-resisting but manageable coat, and
who although remaining powerful and heavily boned, should yet
be active, fast and handy in size. In doing this, these pioneers
also succeeded in retaining the broad skull and powerful muzzle,
ideal for brains and for practical work, and with them the very
kindly and noble expression so characteristic of the original
Guisachan dogs – the aim of all breeders today.” 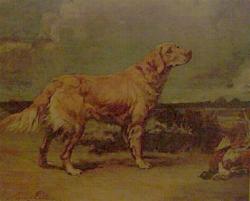 He is said to have kept the original strain of ‘Yellow &
Russian Retrievers & Trackers’, (as they were called) pure
and never crossed them as Lord Tweedmouth did. They were exhibited
until 1914.

With the restarting of Field Trials in 1920 and of shows in
1921 the inter-war years saw the beginning of a gradual rise to
popularity for Goldens supported by a substantial number of new
breeders. In 1921 for the first time KC registrations reached
120. These rose to 375 by 1925 and steadily continued rising until1073
was reached in 1938, the last normal year before the Second World
War.

In 1921 the GRC ran its first Trials and these of course were
the first to be confined to the breed, although Goldens were already
proving that they could well hold their own in any variety stake
competition. Cruft’s entries in 1921were only 34, but this rose
to 231 in 1925 and to 263 in 1927, which remained the highest
figure until after the war.

As early as 1930 a number of dogs of the breed had been exported
and were in Canada, the USA, South America, India, Kenya, France,
Belgium and Holland. 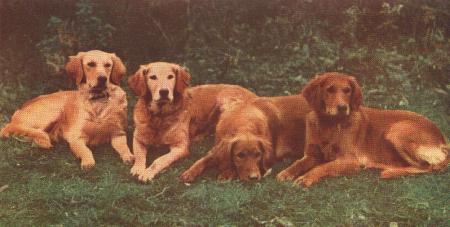 When the breed standard had first been drawn up by the GRC
in 1911, cream had been excluded as a permissible colour, and
in the 1920’s light-coloured dogs were not popular, the favoured
colour being sometimes very red and dark indeed. But the lighter
colour gained greatly in popularity in the early 30’s and in 1936
the Standard was altered to read ‘Any shade of gold or cream,
but neither red or mahogany’ as it was realised that a mistake
had been made in not allowing the original colour.