The Origin of the Breed

Guisachan (Gaelic for
Place of the Firs) 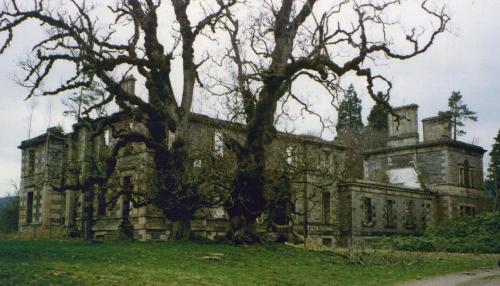 the breed was thought to have originated from a troupe of Russian
circus dogs which Lord Tweedmouth saw performing in Brighton in
1858. These dogs were thought to be about 30 inches at the shoulder
with thick wavy coats, varying in colour from cream to light biscuit.
Lord Tweedmouth was said to be so impressed by their intelligence,
looks and docility, that he purchased all 8 of them and had them
transported to his Scottish Estate at Guisachan, where they were
used for tracking deer.

However the sixth Earl of Ilchester, a great-nephew of Lord
Tweedmouth, in 1952, dismissed the Russian theory, basing his
evidence on a stud book meticulously kept from 1835 which recorded
all the dogs kept at Guisachan and in which there was no mention
of the Russian dogs. The entry of ‘Nous’ hitherto always thought
to be one of the Russian circus troupe, reads ‘Lord Chichester’s
breed – June 1864 – purchased at Brighton. Lord Tweedmouth’s Grandson
had stated that his Grandfather bought his first yellow dog from
a cobbler in Brighton, who said it had been the one yellow puppy
in a litter of black wavy-coated Retrievers, and was given to
him by a keeper in payment of a debt. This puppy was Nous.

During the time from the first mating in 1868 to the last in
1889, some of the puppies bred were kept, some were given to keepers
on neighbouring estates and others to friends and relations in
England and Scotland, thus the early kennels were founded.

The first Golden Retrievers to be exhibited were in 1908.These
belonged to Viscount Harcourt who started his ‘Culham’ line with
stock from the Earl of Portsmouth. They were shown at Cruft’s
and the Crystal Palace, although at that time they were not officially
recognised as a separate breed of Retriever. In 1906 Mrs Charlesworth
obtained her first Golden, a bitch puppy without a pedigree, whom
she named Normanby Beauty. She proved to be a highly intelligent
and tireless worker. In 1908 she mated her to Culham Brass and
in 1909 she joined Lord Harcourt as the only other exhibitor of
the ‘yellow’ retrievers. In 1909 although there was still no separate
classification for them, eight Goldens appeared at Cruft’s, while
ten appeared in 1910.