The GRC had the honour of hosting
the Inter Club Working Test on 15th June 2003 at Holway, Cattistock,
Dorset, by very kind permission of June & Robert Atkinson.
The Golden Retriever Inter Club competition has
run annually since it’s inception in 1979 (except for 2001 due
to the F&M outbreak) when there were but 5 Golden Retriever
Clubs. Today that number stands at 13 with each club taking turns
to host the event.
This year the GRC felt incredibly privileged to
have been invited, by Mrs June Atkinson & her son Robert
to run this competition at the home of their famous working Goldens
with the HOLWAY affix.
Mrs June Atkinson has been successfully campaigning
her Holway Goldens for over 50 years and is undoubtedly the heart
and driving force behind the progress and recognition of today’s
working Golden. Robert followed in his Mother’s footsteps by
winning the prestigious IGL Retriever Championship 30 years after
her.
The GRC are extremely grateful to the 6 judges
and the many helpers who gave up their time to make the day such
a success.
Of the 13 Clubs, 10 were represented.
These were (in alphabetical order)
Berkshire Downs & Chilterns
Golden Retriever Club 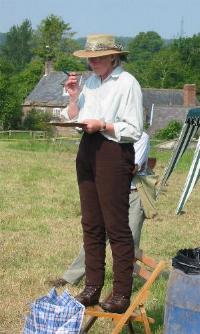 Each test under the supervision of one of the judges had
two components; one for the Novice dogs and a more difficult
one for the Open dogs.

Test 1 was a team test with two seen dummies and two unseen
‘runners’ with the team deciding who went for what. (Those who
forgot that the runners were retrieved first were heavily penalised)

Test 2 was a walk-up with each getting a seen retrieve in the
first field, although the dummy fell in rushes and thick grass
so no retrieve was easy. After passing through the hedge two
dummies were dropped by the thrower and as the team walked on
a dummy was thrown for the novice dog to retrieve, but before
that could be retrieved the open dog was sent back for the unseen
behind and downhill to the right.The lay of the ground meant that for some of the time
the dog was out of sight of the handler and errors crept in.
After the unseen had been retrieved the seen was retrieved by
the novice dog. This was then repeated for the second pair.

Test 3. was a seen in thick rushes followed by an unseen behind
for the novice dogs and a longer seen in front followed by an
unseen at right angles along the line for the open dogs but with
a deep water filled ditch between dog and dummy.

Test 4. there was a long walk to this test. Here the novice dogs
had a seen thrown into a small river, the dogs saw the splash
but could not see the dummy. When this had been retrieved the
open dog was sent for a retrieve across the river and some yards
back. This must have been more difficult for the earlier teams
for there was thick cover for the dogs to negiotiate before reaching
the river. For the later ones there was a track for them to follow.

Test 6 was again a team effort with points being awarded for
each dummy retrieved and some for team effort. Two dummies were
thrown in uncut grass/reeds in which the dogs were mostly out
of sight of the handlers, and collected by the novice dogs and
then the team had to collect a further four dummies in the grass
– there was a time limit.

One of the dogs successfully completing his task. During the lunch break a scurry
and welly wanging competition took place.

Competitors waiting their turn at the scurry

Finally Phil Wagland of the winning team proposed
a vote of thanks.  The day ended with Gwen handing over
the ‘Inter Club File’ rather like the Olympic torch to Midland
GRC, the hosts for 2004. The GRC Committee wish to express
their grateful thanks to all the Field Trial Sub-Committee for
their tireless work in organising this super event on their behalf. All excess proceeds are to be donated to the Children’s
Hospice South West   REPORT ON THE DAY BY GRC WORKING
SECRETARY, ANNIE WALES

Was there anyone who did not make the pilgrimage
to Holway for the Inter-Club Working Test on Sunday 16th June
at Holway, Dorset? If so they missed a day to remember! In fact,
a weekend as most people travelled down the day before and met
up at the Crown in Cattistock for a most enjoyable evening.    The day itself was memorable for many reasons.
Firstly it was kindly hosted by June and Robert Atkinson on Holway
ground – the undisputed mecca of the working Golden Retriever
world; secondly, the weather was as near perfect as it could
be – especially for those camping in the top field; and thirdly
we were graced with the presence of most of the Golden Retriever
Club Committee, both for the dinner and for the event itself.
And despite the inevitable show versus working banter, it was
a great pleasure to be, as it were, a united body for this very
special event.    Organised with her usual efficiency by Gwen
Knox with a huge input from Sara Olner who, amongst other things,
arranged a very successful auction, and with fascinating side
shows such as the welly wanging competition and guess the weight
of the calf, it was, in the words of Dick Bridges himself, ‘a
truly cracking event’ which will undoubtedly go down in the Club
annals as one of the ‘greats’.    No less than ten teams from all over the
country, each of four dogs, two novice, two open, took part and
the ground, which lends itself so superbly to all the requirements
of a Working Test, provided some interesting and challenging
scenarios, all of which could be viewed as typical shooting field
situations.The teams were split into two groups starting
opposite sides of the lane and swapping over after lunch. Fortunately
the stream flowed through both sides allowing plenty of opportunity
for dogs to cool down between tests.    The atmosphere throughout the day was happy
and relaxed and everyone seems to have greatly enjoyed themselves.
In such beautiful surroundings and with such perfect conditions
it would have been difficult not to and many thanks are due to
June, Robert and family for all their help and fantastic hospitality
not only over that weekend but over all the previous weeks of
planning and preparation; to Gwen, Sarah and Judy for excellent
organisation and smooth running; to Ken Chandler, family and
friends who came down en masse from Sussex to provide guns, dummy
throwers etc.; to Jean Dilloway for her out of this world cakes
at the end of the day; to all who helped out in so many different
ways – and last but by no means least, to all those people who
travelled so far to compete and in doing so made this a very
special occasion indeed