Out of the 9 dogs entered 8 completed it and passed.

Although the day was rather foggy and damp it did not the competitors
spirits. All were taken to the first drive, with all the beaters
in the tractor and trailer. Then the competitors were split into
2 groups. One group with John went into the now disused Quarry
and the rest went with Gwen onto a grass field, with a Cotswold
stone wall and maize strip to the left and a field of set-aside
beyond. There were enough birds on the first drive for all the
dogs to be tried on birds in their area. John had enough birds
in the Quarry for all the dogs to have 2 birds each, with some
to spare for Gwen’s group to come into the Quarry to work under
John and Gwen together, after clearing up the birds out in the
set-aside.

Gamekeeper Richard Mace was running Gaina, so he ran her first,
and once she had done 2 retrieves, Richard took on his normal
role as the Keeper and took the guns off to do another drive,
while the rest did their work in the Quarry and in the field of
set-aside.


CONGRATULATIONS GO TO :- [in order that they ran on the
day]

PURBARN COME ALL OVER AGAIN Handled by Richard Mace

Results of Novice Stake held
at Wick Farm, Great Wickering, Essex on 18th January 2002 by kind
permission of W.F.P Shoot and by generous support of Nigel Goss
& the Guns

by kind permission of John and
Liz Barnes

Our thanks go to John & Liz Barnes who were fantastic
hosts, offering us the hospitality of their conservatory for lunch
for judges and helpers and later for tea, cakes and the prize
giving.

John very kindly set the tests for me as he owns and shoots
over the ground – and I live many miles away in the West country
– and they were excellent, very realistic ‘shooting-style’ tests
which admirably tested the dogs for nose and hunting ability as
well asgood handling.

Congratulations to Pam Walton whose award was particularly
popular as Pam has recently taken over her late husband, Wally’s,
dogs and everyone was delighted for her and for Wally.

Many thanks to all the hard working helpers who gave up
the day and even the World Cup to help out. They were greatly
appreciated by all in the GRC. Our thanks also go the judges,
all of whom did an excellent job.

such lovely surroundings. Liz and John have very kindly invited
us back any

In First Place with 529 points

In Third Place with 504 points

In Fourth Place with 496 points

In Fifth Place with 488 points

4. Crosland’s Castlemans For Your Eyes Only

on Fri/Sat 15th & 16th November
by kind permission of I. Bevis Esq.

held on Monday 25th November
at Stockbridge, Hants by permission of

A driven shoot where retrieves were made from a mixture of
woodland and maize field cover and open farmland. Some testing
retrieves of partridge, pigeon and pheasant.

Three eyewipes on the first drive and some failures othe
second, there were still seven dogs in close contention at the
third and final drive. The two leading dogs were called forward
for a run off and Roy Burns’ stylish young bitch proved the unlucky
one.

All credit to Jim Gale and his three ‘puppies’ who had a
super day. Some fast and accurate

retrieves and very good handling throughout the day, when conditions
proved difficult and at times in the fog the dogs were hard to
see!

Elizabeth Pelham not only managed to provide superb catering for
the judges, but also managed to run her bitch and to be amongst
the final competing seven.

This may prove to be a sad occasion, as the keeper who kindly
provided a days shooting is moving elsewhere and this might be
the last time the GRC has the pleasure of running a Stake at Forest
of Bere Farm. We hope this proves not to be the case!

Certificate of Merit Graham Cox’s Millrythe
Melbourne of Wydcombe (B)

A dry but cold day, a driven shoot with some good hunting observed
in a mixture of stubble, open fields and woodland cover. Within
minutes of starting the first drive, steadiness was tested when
two Roe Deer ran immediately from right to left in front of the
guns, not an eyelid batted by any of the competitors. The first
two drives provided a good number of birds, both cleanly shot
and runners. Many fell in open fields but undulating countryside
on the second drive necessitating long and sometimes almost blind
retrieves testing handling ability. This combined with a small

patch of thick cover below woodland which required a testing search
out of sight, knocked out some competitors early on.

round three with her ‘Pebbletoft Jive of Tauvechan’, at the same
time

managing to provide coffee and refreshments in the form of sumptuous
home made fruit cake for guns and judges during the morning. 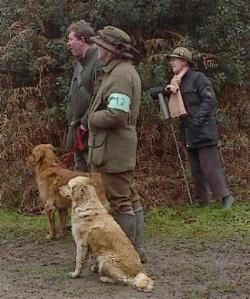 After the second drive the field moved
on to an area comprising a mixture of woodland and maize, where
game finding ability was tested. Most of the third round

competitors progressed with six dogs in contention at the end
of the day.The retrieve of the day was made when Wendy Andrews’
bitch completed a retrieve out of sight of her handler but close
to the crowd of spectators.Seeing the easy route rather than carrying
her prize through the hedge, she trotted towards and through the
crowd of people gathered by the field gate,through the gateway
and back to her handler.

At this stage the leaders became very hard
to separate and a fourth and final drive was required. A most
stylish retrieve was completed by the winner, delivered cleanly
and speedily to hand and the competition was won. Report & photos by Kim Ellis 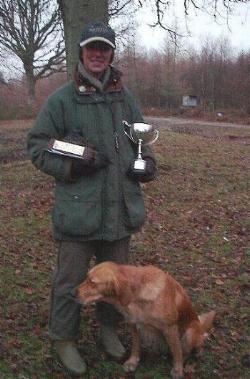 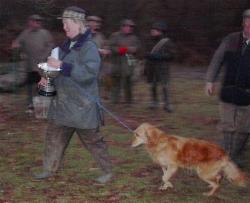 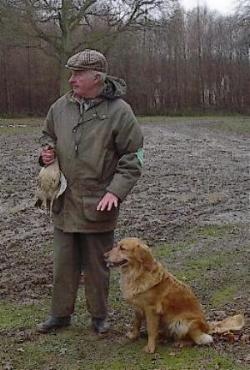 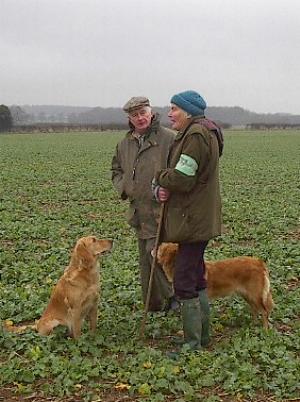