The GRC held its SGWC on 3rd January
at

The judges for the day were Mike Knox and Bob Hargrave.
It was a very cold frosty day but with bright sunshine. There
were 12 dogs entered and they were all required to sit at a drive
where there was a plentiful supply of birds. The dogs were sat
in line in open woodland approx 70 yards back from the guns.
They were divided into two groups, one sat towards the left hand
end of the line of guns the other to the right. All of the dogs
were steady and quiet during the drive then hunted, found and
retrieved fresh shot game. On completion of their test they all
lined out and swept the wood through to pick up all remaining
shot game.
All of the dogs were then taken to the lake for their water retrieve,
where unfortunately one dog refused to enter the water.
The overall standard on the day was the best that I have seen
for this event and eleven dogs were awarded their certificate.
The successful dogs were:
Golden Retrievers:
Purbarn Orange Night Sky at Gushigan handled by Chris Eels
Applebrook Araminta handled by Peter Butterworth
Kaspurgold White Elegence handled by Sue Hocking
Applebrook Accolade handled by Tricie Butterworth
Labrador Retrievers
Woodmist Saffron handled by Sharon Rogers
Warringah’s Tennants Creek JW handled by David Coode
Rockledge Wordsmith of Carpenny handle by Lisa Finney
Flatcoated Retrievers
Gwenadillo Lochness handled by Jane Calverley
Beanit Ned Kelly to Keepersway handled by Robert Ashcroft
Calswish Rosebud for Lizzlog JW handled by Miss H Walker
Curly Coated Retriever
Ir Sh Ch Springcurl Ulysses Cjwot handled by Sue Margerison
Bob Hargrave

Hosted by the Golden Retriever Club
of Scotland

by kind permission of

His Grace, The Duke of Buccleuch

Summary of the tests (kindly provided by Yvonne Storr)
There was in fact a run off for 4th place between Berkshire
Downs and Chilterns G.R.C and Eastern Counties, both on 467 points,
The points were close between all the teams it was a good test,
most of which was run with a novice dog and a open dog running
together.
Test 1
This was a double mark to shoot. The open mark going out first
then the novice 2nd, but the novice was sent first with the open
dog having to remember it’s mark. The handlers were in a small
wood and and the dogs had to jump a wire fence on the way out
and back.
Test 2
This was a double blind, the novice dogs was to shot and it was
on the edge of nettles. The opens was very long, through a big
bed of rushes up a hill and beside a tree stump. This was a very
good test on how the dogs handled.
Test 3
Was a four dog walk up, with both heel work and retrieve being
marked. The novice dogs had a mark into woodland on a bank side
and they had to jump a wire fence. The open dogs was into a different
bit of woodland further away with also a fence to jump.
Test 4
Was also a double blind. The handlers were stood on a hill
top looking down on the area. The novice dogs had a blind between
a fence and the pond, which drew the dogs, so handling again
had to be spot on. The open dogs was over to the right into a
grassed bank with a few trees again over a fence. The open dogs
had seen where the novice dogs had run some wanting to pull to
the same area and some winding where the novice dummy had been
so again good handling was needed.
Test 5
Again the handlers were stood up a height looking down on
the area, with novice dog been sent for a blind down the hill
towards woodland with a dummy near a tree to shot, and the open
dogs getting a mark to shot into the wood over a fence.
Test 6
Was a water retrieve over a wide river, The dogs were able to
cross half of it by running then they had to swim. The water
was deep and running nicely fast.The cover on the other side
was quite high and the dummies were not giving much scent away.
The novice dogs got a mark to shot over, but the open dogs had
a blind with no shot, This was a great test to watch as we were
stood on top of a high bank and the dogs were being sent at water
level, so we could see a lot more of the dogs than the handlers,
who said they could only see where they were at by the cover
moving.
It was the only test where there was a delay but considering
the swim the dogs had, it was totally understandable but it was
a really good test both of the dogs marking after their swim
and also how the open dogs handled over water. 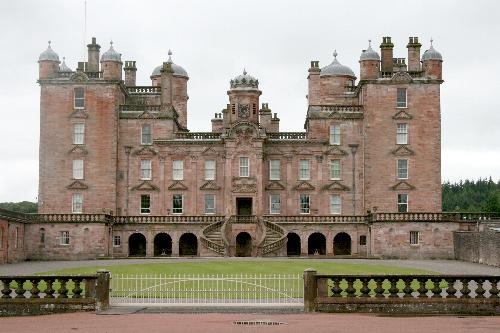 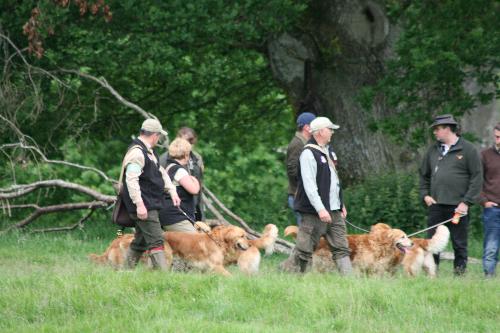 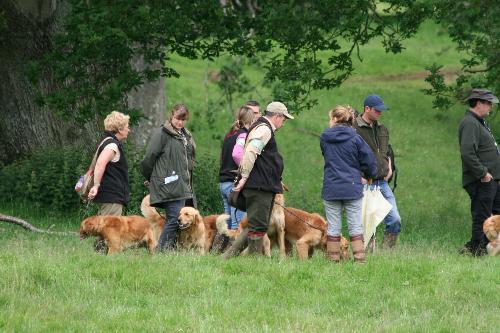 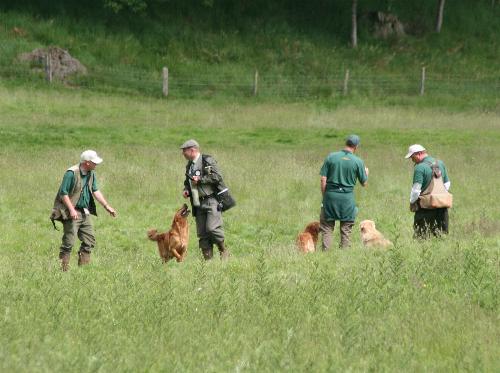 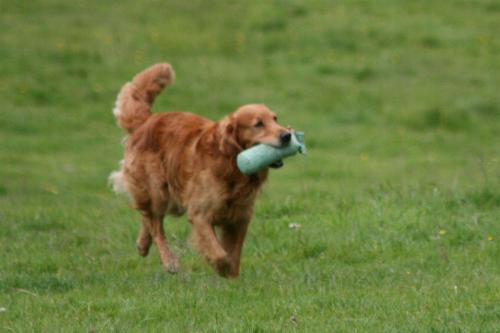 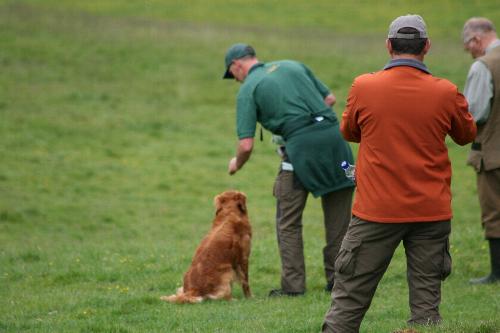 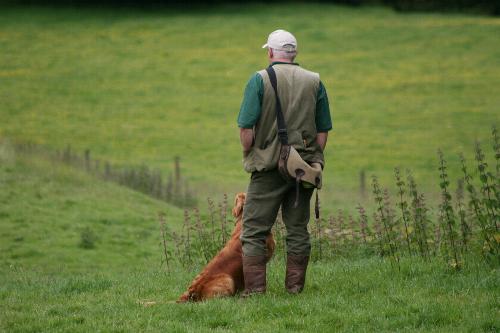 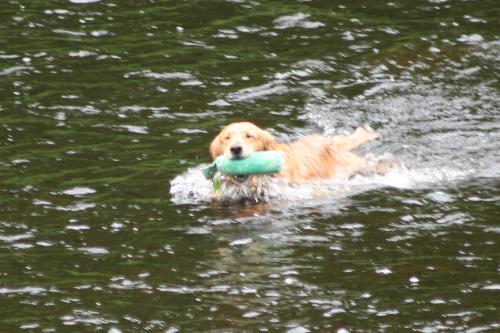 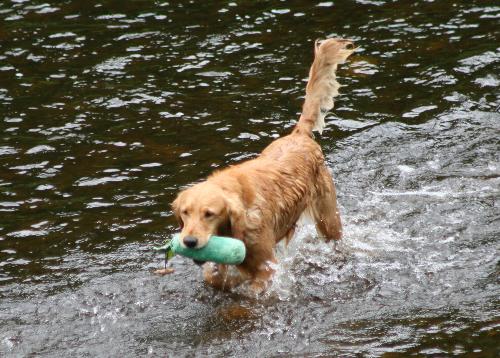 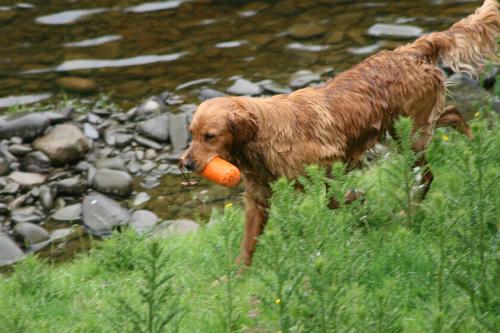 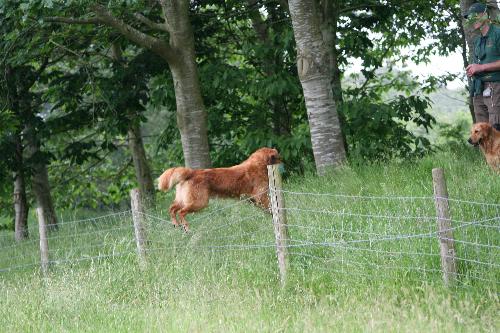 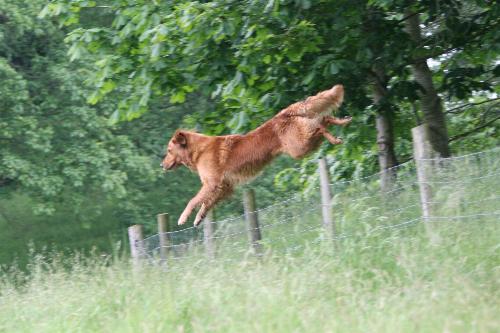 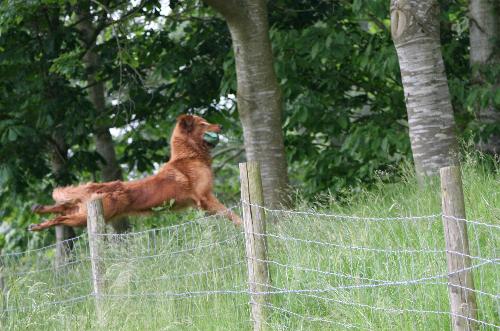 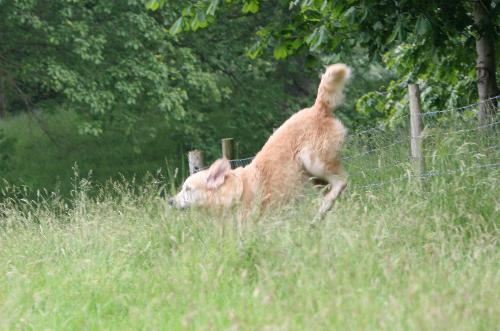 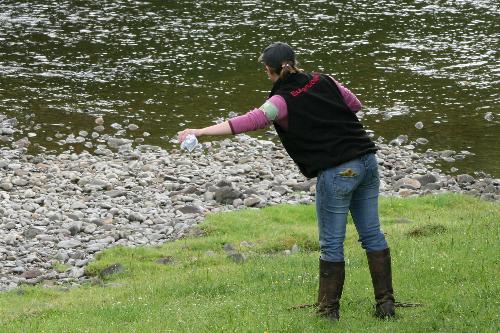 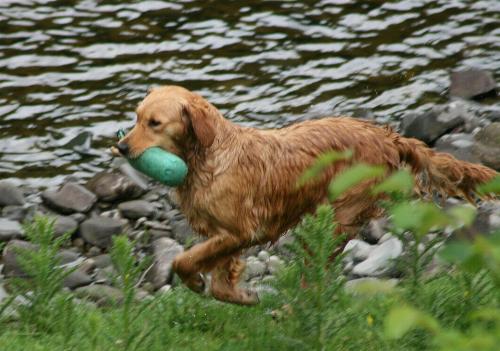 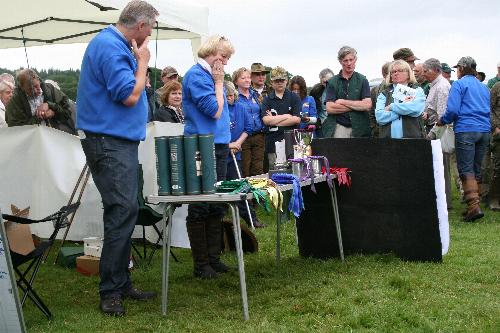 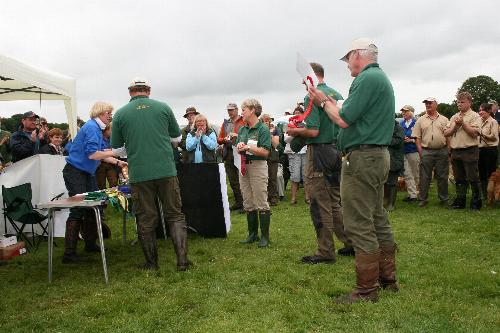 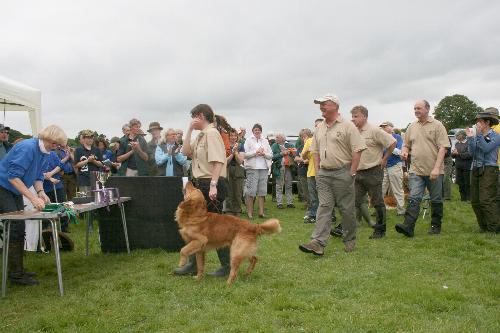 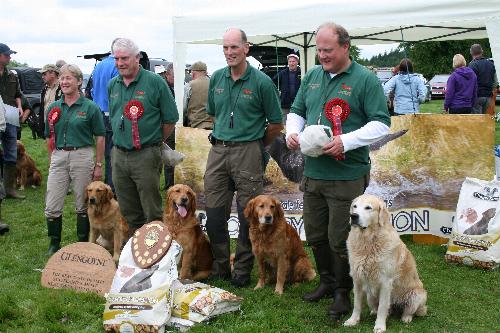 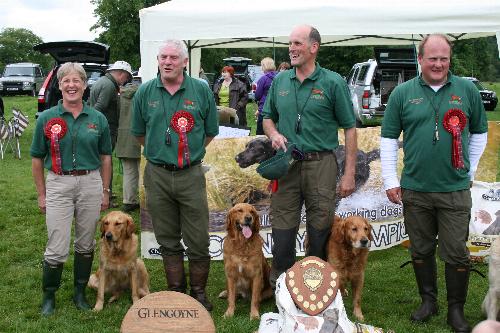 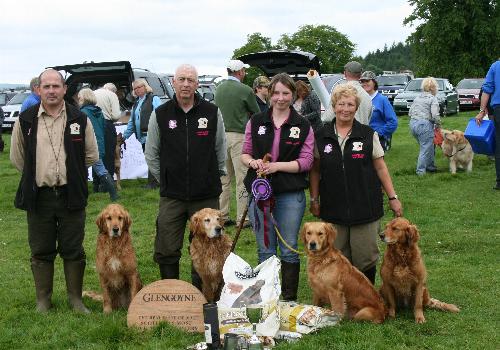 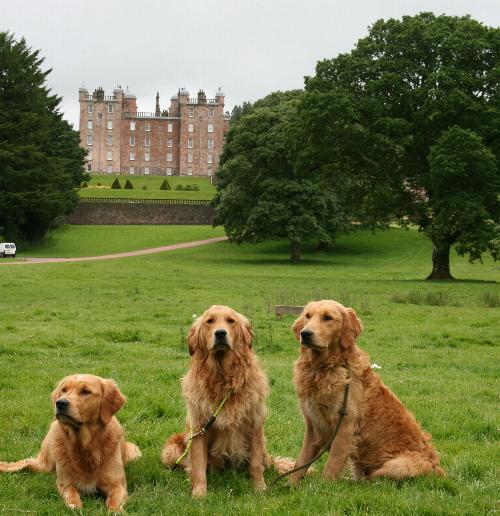